The estimate Thursday morning, before a more accurate measurement of the involved land could be conducted, was 3,000 acres. And that was already a huge increase from the estimate given Wednesday night, which was 700 acres.

“Crews used heavy equipment to build a break between the fire and about 15 homes on the bench,” says a statement released at 6:45 a.m. Thursday on Utah Fire Info’s Twitter page. “0% contained. No evacuations.”

More than 100 firefighters will be working the scene on Thursday, and will be continuing to use bulldozers and controlled fires — to consume grass and other potential wildfire fuel — to build a break between more than a dozen homes and the active fire.

Other Stories of Interest:  Provo police arrest man allegedly in possession of 4.3 pounds of heroin

The strategy used by fire crews is based on conditions including expected wind directions, an official said, noting that wind can always change.

The Goose Point Fire was first reported at 6:26 p.m. on Wednesday.

The fire was sparked by machinery, according to information released at a news conference. No specific details on the type of machinery at fault were shared.

A map issued by Utah Fire Info showed the location of the fire to be near the south end of Utah Lake, on the east side.

Utah Fire Info also shared an additional image of the fire, below. 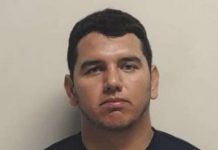