“Look, we’ve made it clear,” Lee told Fox host Bill Hemmer. “All the republicans on the Senate Judiciary Committee have made clear that this is a lifetime appointment to the highest court in the land to fill a seat previously filled by a judicial icon, Antonin Scalia.

“We think the American people need a chance to weigh in on this issue, on who will fill that seat. They’ll have that chance this November, and they ought to have that chance.”

Lee, a member of the committee, said he doesn’t know much about Garland.

“I know a few things about him,” Lee said. “… But that really isn’t the point here. The point here doesn’t have nearly as much to do with who the president nominated.

“It has entirely to do with the fact that we’re in a presidential year, and since 1888 that a Senate controlled by a party different than the party occupying the White House has confirmed a vacancy that arose to the Supreme Court that arose during a presidential election year.”

Lee said the earliest Garland could hypothetically be approved would be May, when the Supreme Court be nearly out of session. It would be back in session in October, when the election for a new president would be a month away, Lee said.

“We think the American people need a chance to weigh in on this issue, on who will fill that seat,” Lee said. “They’ll have that chance this November, and they ought to have that chance.”

So the Senate Judiciary Committee won’t be allowing a hearing for Garland, or anyone else Obama might have nominated, Lee said.

“We’re sticking to our plan that we outlined a few weeks ago.” 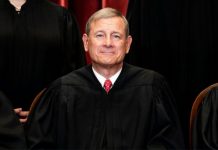