SALT LAKE CITY, Nov. 9, 2016 (Gephardt Daily) — A Utah-based longhaul trucker who pleaded guilty to kidnapping two women and making them his sexual slaves has been sentenced to 20 years in prison.

Timothy Jay Vafeades, 56, pleaded guilty in June to two counts of transporting for illegal sexual activity. In exchange for his guilty plea, two kidnapping charges against Vafeades were dropped by federal prosecutors. On Wednesday, he received the longest sentence allowable under the plea deal.

Vafeades — nicknamed the “vampire trucker” for a pair of vampire-inspired false teeth he wore, and for naming his truck the Twilight Express — was charged in March 2014 with kidnapping and sexually assaulting two women, age 18 and 19, who he lured into his tractortrailer and held captive for long periods of time.

The women said Vafeades took their IDs and cell phones, and forced them to to sleep naked and shower with him. He also beat and sexually assaulted them. The women said he used a power tool to sharpen their teeth. One woman said he also used an X-Acto knife on her teeth.

According to court documents, the FBI located at least four other women who had been held captive and abused in similar ways by Vafeades. 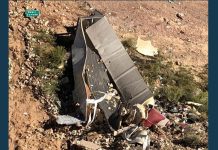