March 10 (UPI) — The U.S. Coast Guard and other agencies rescued 46 people stranded Saturday morning when ice broke apart while they were fishing on Lake Erie.

All of them were escorted to shore “and we’re happy to report everyone is safe,” the U.S. Coast Guard Station Marblehead in Ohio posted on Facebook. The island is 80 miles west of Cleveland.

In addition, about 100 more people swam or found ice that was still connected and walked to shore.
“But as it continued to warm up, more ice bridges would break up creating more ice floes,” Petty Officer Brian McCrum told the Sandusky Register.

They were fishing when an ice floe opened an area of water and cut it off from the shore around 8 a.m., the Port Clinton News Herald reported.

One witness told the newspaper that people were “freaking out” when the opening in the ice began growing.

McCrum said warming temperatures and the wind contributed to the cracks.

In freezing waters — 32 degrees Fahrenheit and below — the expected time of survival from hypothermia is less than 15 to 45 minutes, according to the United States Search and Rescue Task Force.

“Remember, ‘no ice, is safe ice,” the Coast Guard cautioned on its website. “If you’re going to partake in ice activities; wear a life jacket, check ice conditions and weather reports before going out, file a float plan with a family member or friend, carry a handheld GPS, EPIRB, marine radi and a cellphone.” 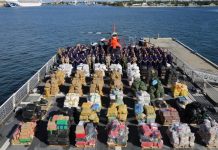 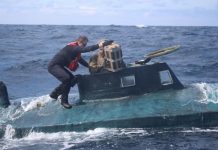