Scientists attributed the cause of the global warming event, also known as the Paleocene-Eocene Thermal Maximum, to an extraterrestrial impact after discovering microtektites while searching for fossilized remains of Foraminifera. Assistant professor Morgan Schaller says the timing of the impact and the rapid change in the Earth’s climate is likely no coincidence.

“This tells us that there was an extraterrestrial impact at the time this sediment was deposited — a space rock hit the planet,” she said in a press release. “The coincidence of an impact with a major climate change is nothing short of remarkable.”

The discovery was made completely by accident. Schaller says she found the microtektites, which look like dark glassy spheres, after becoming frustrated in her search for Foraminifera fossils. The research team found as many as three microtektites per gram of sediment examined, and say the carbon introduced to the atmosphere as a result of the comet impact likely influenced a drastic change in the Earth’s prehistoric climate. Their findings were published in the journal Science.

“In sediment records, when you look at the ratio of carbon-12 to carbon-13 in a particular species, you see that it’s stable and then it abruptly shifts, wiggles back and forth and slowly returns to pre-event values over hundreds of thousands of years,” Schaller explained. “This evidence defines the event, and tells us that the atmosphere changed, in particular adding carbon from a source depleted in carbon-13. A comet impact on its own may have contributed carbon to the atmosphere, but is too small to explain the whole event and more likely acts as a trigger for additional carbon releases from other sources.”

While examining the samples, Schaller and her research team found some of the microtektites contained “shocked quartz” and microcraters, suggesting the impact was preceded by high speed.

During the Paleocene-Eocene Thermal Maximum, Earth’s temperature rose by an average of 5 to 8 degrees Celsius for the next 150,000 years. The source of carbon dioxide associated with the warming event has yet to be identified. 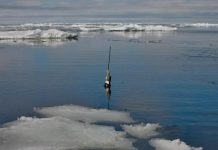