July 7 (UPI) — Hall of Fame Quarterback Kurt Warner and his wife, Brenda, donated a fully furnished Habitat for Humanity home to a single mother and her four daughters Saturday.

Warner’s First Things First Foundation through a partnership with Aaron’s Inc., U-Haul and Habitat for Humanity St. Louis donated the home to a Somalia immigrant who fled domestic abuse. The woman didn’t want to be on camera but said she was extremely grateful for the once-in-a-lifetime gift.

Last year, the foundation made a similar donation in Warner’s hometown, Cedar Rapids, Iowa, contributing $25,000 to the home’s construction.

“It’s about coming back to where our roots are here in Iowa and being able to impact our communities that impacted us,” Warner said. “And that’s really what it’s all about.” 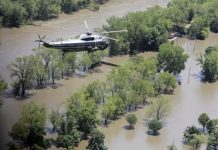