AMERICAN FORK, Utah, Aug. 13, 2022 (Gephardt Daily) — American Fork Police have revealed new information in the arrest of a suspect who triggered an Amber Alert Tuesday night after a violent confrontation with officers in a local Walmart store parking lot.

Danny Sihalath, 29, is now booked into the Utah County Jail, after the saga ended in the Intermountain Medical Center in Murray, where family and friends had convinced him to go for treatment of a gunshot wound, and await police.

“We had been pushing them quite a bit,” Lt. Josh Christensen, spokesman for the American Fork force. “Ever since the Amber alert Tuesday night.”

That’s where events began, as Sihalath was allegedly caught shoplifting at the Walmart in American Fork. He scuffled free from employees but police had been called and they confronted him in the parking lot as he headed to his car.

He ignored commands to stop and got into the car; his female companion either pushed out or got out on her own, Christensen said, only to be knocked down and nearly run over as Sihalath backed up then sped off.

Christensen said one of the three officers on the scene fired at the vehicle, only he didn’t know a 5-year-old was in the car when shots were fired, Christensen said. “That left us with a sick feeling.”

But the boy, described incorrectly as 8-years-old in the subsequent Amber Alerts, was found unhurt the next day, Sihalath dropping him off with relatives, Christensen said. Only Sihalath was hit by the gunfire, he said.

But Sihalath was in bad shape from the gunshot wound, and as a veteran criminal he knew if he went to a hospital or doctor police would be contacted.

“It’s not like an old black and white movie where the gangster finds a veterinarian he can pay under the table,” Christensen said. Family convinced him to get the medical care and give himself up to police, Christensen said, and officers arrested Sihalath at the Murray hospital Thursday evening. He was booked into the Utah County Jail Friday morning.

The bevy of felony charges he faces include aggravated assault for the injury to his companion in the Walmart parking lot, plus multiple counts of evading police and reckless driving, and child-endangerment, with kidnapping a possibility. 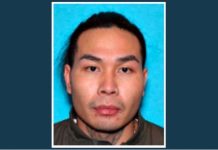