LOS ANGELES, Aug. 25 (UPI) — Jana Kramer and her husband Mike Caussin have separated, according to a new report, and Caussin has entered into rehab.

The separation, confirmed by People magazine, comes seven months after the birth of their first child, Jolie Rae back in February.

“This has been difficult for Jana but her priority is being there for [7-month-old daughter] Jolie,” a source close the country star noted to People.

Caussin, a former NFL star has entered into a rehab facility for undisclosed reasons.

The “Circles” singer is currently on tour and is promoting her latest album “Thirty One.” According to Entertainment Tonight, Kramer still appears to be wearing her wedding band.

Kramer, 32, and Caussin, 29, started dating in 2014 with the former tight end proposing just four months later. The pair got married in May of 2015. 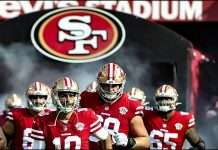