MAGNA, Utah, April 28, 2021 (Gephardt Daily) — At least two people have been taken into custody after a 12-hour SWAT standoff in Magna.

The ordeal began about 3:30 p.m. Tuesday when multiple units from the Salt Lake City Police Department, including the SWAT team, began staging in the parking lot of the Oquirrh Hills Apartments near 8400 W. 3000 South.

There were unconfirmed reports police were searching for a suspect wanted in a fatal Salt Lake City shooting which happened near 900 S. 500 West early Monday morning.

Throughout the afternoon, into the night, negotiators were in contact with someone in one of the apartments.

As those negotiations continued, Unified Police took over the scene.

At about 3:20 a.m. Wednesday two people were seen being taken into custody after tear gas was used to drive them from the apartment.

Police say the pair who have been arrested are a father and his teenage son. 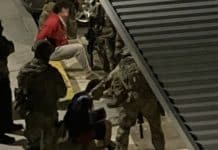