SALT LAKE CITY, Utah, July 21, 2016 (Gephardt Daily) — A man is in police custody after barricading himself inside a room at the Salt Lake Regional Medical Center Thursday night.

Salt Lake City Police Det. Cody Lougy said officers were dispatched at 7 p.m. after a 911 call came in regarding a barricaded person at a Salt Lake City area hospital.

“The man appeared to be high on some sort of medication or some kind of drug, and became agitated with hospital staff and starting fighting with them, eventually barricading himself in one of their rooms.”

Lougy said the room the man went into is one used for family counseling.

“It was on the second floor, on the west side in the ICU department,” Lougy said.

“Several rooms around the man had to be evacuated.”

The man could be heard inside the room, and Lougy said the man broke the west-side window and was banging on the walls. He was armed with a club.

Over the course of a couple of hours, the man had been attempting to barrel his way though the wall, unaware that police were waiting on the other side. The man was taken into custody as he came through the other side.

Lougy said the man did a considerable amount of damage to the room, and did appear to have injured himself.

“We believe he may have injured his hand when he broke out the glass window,” Lougy said.

“He is receiving medical treatment from the hospital. They did have a medical team waiting for him to come out of the room. ”

Lougy said they are not releasing the identity of the man at this time.

No other injuries were reported. 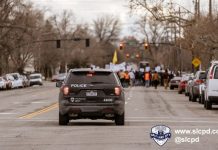 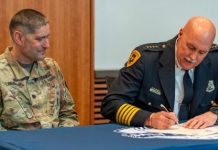