SALT LAKE CITY, Utah, March 16, 2016 (Gephardt Daily) — The Republican debate scheduled in Salt Lake City for Monday has been canceled, according to a source at the Salt Palace, which was the planned venue.

The debate was canceled after Donald Trump, the Republican frontrunner for the party’s nomination, announced to Fox News that he would not attend the debate.

“And I’m doing a major speech in front of a very important group of people, I think it’s eight or 9,000 people, that night and it was scheduled awhile ago.” Trump’s talk is reportedly before the American Israel Public Affairs Committee.

GOP organizers have said Trump, like all the candidates, was told of the debate, which was scheduled for at 7 p.m. Monday at the Salt Palace, and was set to run on Fox News.

Soon after Trump’s announcement, a strategist for Ohio Governor John Kasich confirmed that Kasich, also, would not participate in the Salt Lake City debate.

“No debate in SLC Monday due to Trump backing out,” said Kasich associate John Weaver, in a tweet. Weaver was hired to work for Kasich on June 15 of this year. “No surprise Trump avoiding contrast. Utah: @JohnKasich headed your way Fri.”

Kasich is expected to be in Utah Friday for talks at Utah Valley Valley University, in Orem, and Davis High School, in Kaysville.

Since Florida Senator Marco Rubio suspended his campaign on Tuesday night, that would have left Texas Senator Ted Cruz as the only candidate who had not announced he was skipping the event. 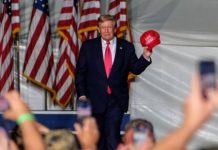