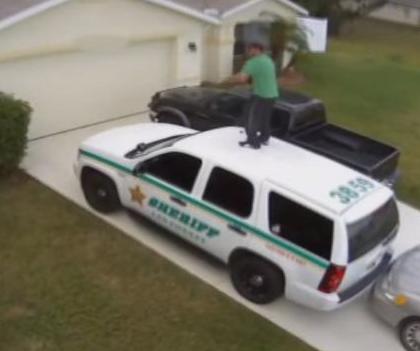 Florida Man Dances on Police Vehicle to Ward Off Vampires

CAPE CORAL, Fla., June 4 (UPI) — Authorities in Florida shared video of a man dancing on a marked sheriff’s office sport-utility vehicle in an incident he blamed on vampires.

Radecki, who was arrested on charges of disturbing the peace and criminal mischief, told deputies a “woman with fangs” came to his door and told him a human sacrifice involving vampires was imminent.

“Therefore, Radecki made the conscious decision to get the Sheriff of Nottingham to help him stop the slaughter of small children,” the Cape Coral police report of the April 7 incident states.

Radecki told officers he was not under the influence of drugs or alcohol at the time of the incident and he has not been diagnosed with any mental health conditions.