DENALI NATIONAL PARK, Alaska, Aug. 24 (UPI) — A visitor to Alaska’s Denali National Park captured video of a grizzly bear “having fun” with a leisurely roll down a giant hill.

The video, posted to YouTube by David Pangborn, features footage of a grizzly bear rolling and frolicking down a hill while park visitors snap photos.

Pangborn said in a Reddit post he does not believe the bear was in pain or other form of distress.

“This one is just having fun,” he wrote. 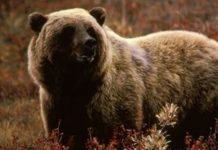