NORTH BERWICK, Maine, April 6 (UPI) — A Maine teenager captured an unusual video of a moose running down a street and stopping in front of her camera to seemingly perform a dance.

The Elmwood Resort Hotel posted a video to Facebook this week showing a moose running down a rural road toward the filmer’s school bus stop.

The moose stops in the middle of the road in front of the filming teenager and does a series of dance-like spins before continuing on its way.

The video was found to be the work of Emily Fenderson, 17, who said she filmed the clip about two years ago while a sophomore at Noble High School.

“All of a sudden it was trotting down the road. At first I thought it was a horse,” shetold the Portland Press Herald. “It was kind of scary because it was within 5 feet of us.”

The video went viral after being reposted by the Elmwood Resort Hotel.

“Once I posted it on our Facebook page, it just went crazy,” hotel manager Scott DeFelice said. “I was flabbergasted.”

Locals said the moose has since been spotted in the area, but close encounters like the one captured on video by Fenderson are extremely rare. 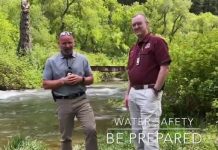