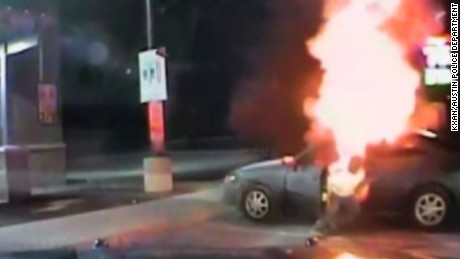 AUSTIN, TEXAS – June 3, 2015 (Gephardt Daily) On Tuesday, June 2, 2015 at 2:00 a.m., the Austin Police Department responded to a welfare check call for a man threatening to commit suicide. What happened next is explosive… literally.

Austin Police released the dash cam video that shows officers approaching the suspect as he gets inside his car. He can be heard saying “I think I’m going to set the car on fire,” Within seconds you hear a loud pop and suddenly the car explodes.

The suspect was pulled by officers out of the burning car and was taken to the hospital in serious condition.