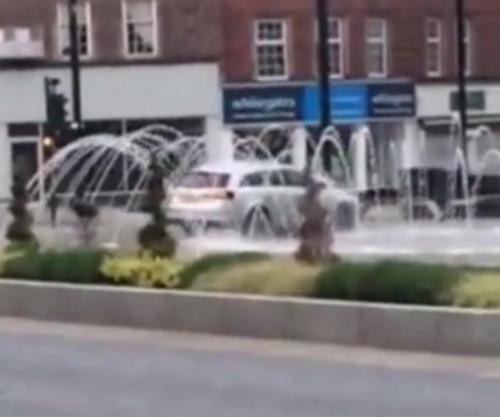 WAKEFIELD, England, May 15 (UPI) — A British motorist taking his car for a spin through a public fountain for a free car wash was caught on camera — and by the police.

A witness in Wakefield, England, took video about 8:30 p.m. Thursday of the silver Vauxhall Insignia driving in circles under the fountain jets at The Bullring in the city center and voices can be heard heckling the motorist until a police car pulls up and chases the car away from the fountain.

Police did not say whether the motorist was arrested or issued a citation.

“The driver’s actions can only be described as anti-social and inconsiderate behavior at best. I am pleased to say officers were on hand to deal with it on this occasion,” Inspector Ian Williams, Wakefield Police’s neighborhood inspector, told the Wakefield Express. “The area is used by both elderly and young people throughout the day and this type of driving is not acceptable and will not be tolerated.”