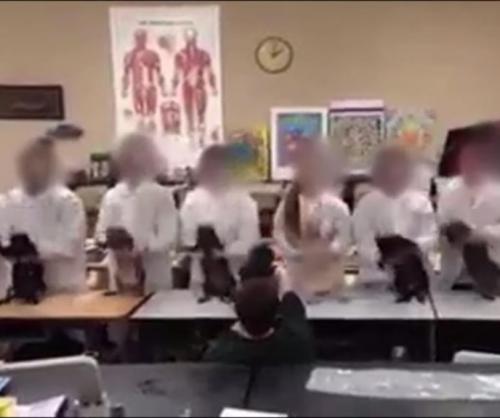 The video, shared on YouTube by animal rights group People for the Ethical Treatment of Animals, shows the Harding Charter Preparatory High School students performing a choreographed routine in a classroom to the tune of the Meow Mix cat food jingle while holding the dead cats.

“If you think of a beloved family pet that you care about that’s ended up being euthanized, then sold to a dealer, and this is how their body is treated, I don’t think anybody would approve of that,” Oklahoma State Director of the Humane Society of the United States Cynthia Armstrong told KFOR-TV. “Well, I’m really shocked, I’ve always had a high opinion of Harding.”

“I think it’s really a stain on their reputation and they need to do something to stop this and make sure it doesn’t happen again,” Armstrong said.

Harding principal Justin Hunt said in an email to a state official the students in the video were not punished because several of them were no longer students at the school by the time the video was brought to his attention.

The school responded to the video in a statement Wednesday.

“Harding Charter Preparatory High School does not condone the conduct of the students nor does it accept such conduct as appropriate in any setting. We agree that animals should be treated and handled with respect and dignity, a standard that was not upheld in this instance.”The animals seen in the video were purchased from a reputable scientific education company that supplies such animals to other schools. HCP will continue to review its curriculum methods for the purpose of providing the best educational experience for its students within the confines of acceptable scientific standards. We are re-examining our classroom instruction to ensure we meet the high standards to which we hold ourselves.”These students made a mistake and they will most likely make other mistakes in their lives. Our hope is that they are aware of the effect their conduct has had on their fellow students, community, and school, and that they will learn a valuable lesson about how to conduct themselves in the future as responsible adults.

“Again, we find the conduct portrayed in the video unacceptable and not something we tolerate. We hope that the measures we are taking will prevent such conduct from ever being repeated. We are looking at ways to better educate our student body in the treatment, respect, and handling of animals, not only in a scientific environment, but also in a real life setting.”