MIDLAND, Texas, Sept. 24 (UPI) — A Texas high school football team’s kicker attempted an extra point and the ball made it through the goal posts — after bouncing off a referee’s head.

A video posted to YouTube by Marshall Hughes shows the ball appear to be traveling far too low to the ground for a successful point, but the ball hits the head of a referee standing in front of the goal and bounces just high enough to go over the crossbar and make it between the posts.

The video shows the game’s referees appear to be momentarily baffled before declaring the kick good.

“Talk about special teams player of the week!” Hughes wrote in the video’s description. 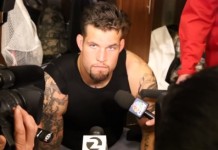