New Zealand Police uploaded a video of the rescue on Facebook, congratulating one of their police districts on their effort to help the creature.

The video opens with a shot of the word “Police” printed on the bow of a boat. It then pans left to reveal a crew of four aboard a small dinghy. One of the individuals is using a sort of pole apparatus to carry out the task.

Facebook users congratulated the team on their efforts. Nikki Lockwood of Auckland, New Zealand said “The average NZ police officer sure has a varied job description! Solid effort” while Karl Pearson of Palmerston North, New Zealand said “Patrolling the waters like a boss! Where do whales keep their license and registration?” 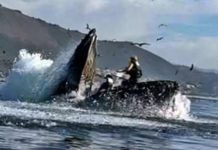 California kayakers end up in mouth of humpback whale