ALBUQUERQUE, Dec. 29 (UPI) — The latest weather forecasts from NOAA suggest El Nino — the weather phenomenon caused by an unusually warm band of water in the Pacific near the equator — will continue through the winter and into early spring.

“That means that California, Arizona, New Mexico and points east get more than their normal share of winter storms, and the Pacific Northwest, which is normally very wet, gets fewer than normal storms,” climatologist Dave Gutzler, a professor of Earth and planetary sciences at the University of New Mexico, explained in a recent press release.

Researchers believe the current El Nino system will be one of the top three strongest since weather scientists began tracking the phenomenon in 1950.

El Nino has already been blamed for the deadly storms that swept across the southern half of the United States over the Christmas holiday.

Extreme weather aside, many in the Southwest will welcome rain and snow. Droughts have plagued the region in recent years, and below average snowfall has further exacerbated the situation.

“The climate prediction center at NOAA has expressed optimism that El Nino really will last through the winter, which will be great news for New Mexico in terms of winter precipitation,” Gutzler concluded. 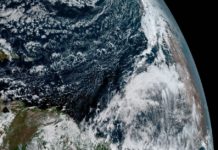