WASHINGTON, Dec. 12 (UPI) — Large swaths of the United States are preparing for some of the coldest winter temperatures in decades, as meteorologists warn the frigid “polar vortex” blast will roll through around mid-week.

High temperatures in some areas will be 20 to 30 degrees below average and wind chills may drop as low as 40 degrees below zero thanks to the polar vortex making another appearance in the U.S.

The polar vortex is not a new weather term or phenomenon, though it has only recently been popularized by television and internet meteorologists to describe a common winter event. The vortex always exists – a low pressure system swirling at each pole – but it strengthens in the winter and occasionally expands into lower latitudes, sending frigid polar air with it. The phenomenon happens in Europe and Asia as well.

The vortex’s visit is a little early – it made its first appearance in news vernacular in January 2014 – but it will be no less brutal this year. Recent major vortex events also happened in 1977, 1982, 1985 and 1989, according to the National Weather Service.

As the vortex stretches south, meteorologists say cities such as Chicago will see single-digit temperatures by Thursday, and New York City should be in the high 20s and low 30s from at least Wednesday until sometime Saturday.

Later in the week, snow is expected to travel across the country, from the Northwest and northern Plains on Thursday, across the Midwest Friday and likely to the Northeast by Friday or Saturday.

The week of wintry weather is expected to make conditions worse in the Midwest and some of the Northeast, which is already digging out from snow last weekend. Parts of New England already had closed some schools and roads, and airports in Chicago cancelled hundreds of flights on Sunday as a winter storm hit the city. 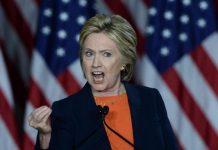 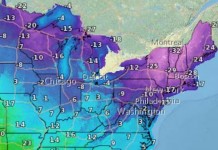