The River Irwell and River Roch both burst their banks, causing severe flooding in Salford, Manchester and Rochdale. Flooding destroyed several homes and businesses, including a 200-year old pub located on a bridge above the River Irwell. The River Calder and Rochdale Canal also overflowed, causing damage to nearby houses. The Army was deployed to Cumbria to aid in flood relief.

The Environment Agency reported that every river in Lancashire exceeded record levels Saturday morning, prompting seven flood warnings – warning that flooding is a “danger to life.” Fifteen flood warnings have been issued for Yorkshire.

Homes have been evacuated in Mytholmroyd, West Yorkshire, Ribchester, Whalley and Lancashire.

Saturday afternoon, a 20-foot sinkhole opened up on the M62 near Rochdale, Greater Manchester. The Mirror reported traffic was brought to a halt. Authorities later closed the westbound side of the freeway to inspect the sinkhole, which spanned two lanes of traffic.

Many roads and bridges have been closed due to flooding. Many roads in Ilkley and West Yorkshire are underwater. Floods Minister Rory Stewart has called the rainfall “unprecedented.”

The Telegraph reported that in the midst of some 300 flood warnings across the UK, drivers were abandoning their cars in North Wales. 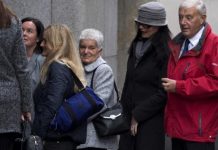