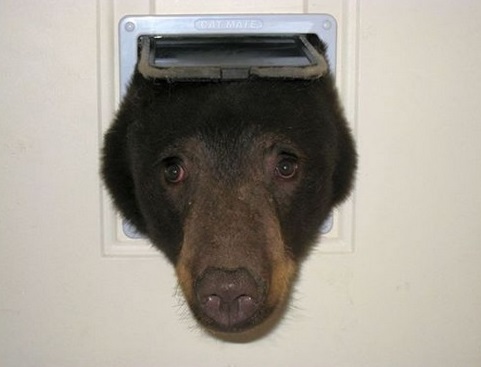 SANDPOINT, Idaho, Aug. 17 (Ben Hooper) — An Idaho man snapped pictures of a bear attempting to get into his home through a cat door but only managing to fit its head through the opening.

Doug Harder of Sandpoint said bears have become a frequent nuisance at his condo this year and he first snapped photos of the animals when a mother and two cubs climbed onto his second floor deck to eat birdseed in late May.

He said bear sightings continued in the area and a yearling broke into his condo while he was on vacation last week by opening the sliding glass door, which he had left cracked open with a piece of wood blocking the doorjamb.

Harder said the intruder did very little damage to his property, but the animal defecated on the carpet and raided the domicile for food including flour, brownie mix, Toblerone and Pepsi.

The homeowner said he went to investigate a racket at his door Thursday and was shocked to see a bear attempting to squeeze through his cat door. He said the animal was far too large to fit more than its head through the door.

“It came to the cat door Thursday night, trying again and again to get through, which is when I took the photo,” Harder told CNN. “My cat is in the photo on Friday, showing the width of the sliding glass door the bear squeezed through. It came back yesterday trying to get through the cat door again.”