April 15 (UPI) — Dr. Pepper surprised a Kansas woman with her very own outdoor soda fountain after she shared a tweet expressing her love for the beverage.

Kansas State University Student Clair Daniels tweeted in December saying she wished she had a Dr. Pepper fountain installed in her house to save money on her favorite soft drink.

“I really just need to have a Dr. Pepper fountain installed in my house,” she wrote. “That would probably be cheaper than how much I spend on it currently.”

Much to her surprise the soda company arrived on her doorstep five months later to install a 6-foot-tall maroon colored Dr. Pepper fountain in her front yard, capable of holding 5 gallons of her favorite drink.

“It’s really crazy,” Daniels told the Wichita Eagle. “I am still kind of in awe…It was just kind of a joke tweet, but here we are. I think it’s awesome. I’m really excited. It’s kind of crazy to think one tweet could make this happen.”

Daniels said she drinks two or three cans of the soda a day, and while she won’t be able to drink from the decorative outdoor fountain Dr. Pepper also provided her with 1,200 cans for her drinking pleasure.

“I’m really excited. I think it’s weird how one tweet can make this happen but pretty cool,” she said.

Lyndsay Loomer, associate brand manager of Dr. Pepper marketing, said the fountain was built from scratch for a promotional video featuring Daniels after the marketing team noticed her tweet.

“We are always monitoring social media to see what our fans are saying about us and how they are expressing their love for Dr. Pepper,” Loomer said. “She had a really creative tweet about just needing a Dr. Pepper fountain installed at her house. She thought that would make her life easier based on the amount she was drinking. We put our own creative spin on it by building an actual fountain, not the one she might expect, and throwing her a party.”

Dr. Pepper said other people may receive similar surprises based on tweets about the brand as part of a marketing campaign. 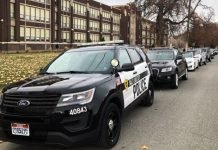