ATHENS, Greece, Oct. 21 (UPI) — A Greek snorkler filming his underwater encounter with a small octopus recorded the moment the mollusk latched onto his face like a scene from “Alien.”

Nikolaos Kepesidis posted a video to YouTube showing him meeting the octopus underwater and coming in to take close-up footage when the octopus decides to go for a close-up of its own.

Kepesidis surfaces and turns his camera around, showing the octopus has latched onto his face mask in a manner reminiscent of the similarly-tentacled face-hugging creatures from the “Alien” films.

Kepesidis pulls the octopus off of his face and places it back in the water, but the cephalopod’s curiosity persists and the man has to push it away when it swims back toward him.

The snorkler said he wasn’t sure if the octopus’s intentions were friendly or hostile. He titled the video: “Octopus attacks or making new friends.” 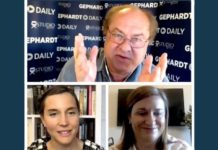