ROYAL PALM BEACH, Fla., Feb. 9 (UPI) — A Florida man was arrested for throwing a live 3-1/2-foot alligator into a Wendy’s drive-through window in what his parents branded “a stupid prank.”

Joshua Jones, 23, of Jupiter, was taken into custody by U.S. Marshals this week following an investigation into the Oct. 11, 2015, incident.

The Florida Fish and Wildlife Conservation Commission said Jones pulled up to the drive-through window at the Wendy’s in Royal Palm Beach about 2:15 a.m. and tossed the gator into the window after being handed a beverage by a worker.

The FWC shared a photo of the alligator inside the restaurant.

The alligator was removed by FWC officers and released into a nearby canal.

James, who allegedly admitted to picking up the reptile from the side of the road and throwing it into the Wendy’s, was arrested on charges including felony aggravated assault with a deadly weapon and misdemeanor unlawful possession and transportation of an alligator.

The suspect’s parents said their son didn’t mean any harm with his actions.

“It was just a stupid prank that he did that’s now turning into this. He’s a prankster. He does stuff like this because he thinks it’s funny,” his mother, Linda James, told WPTV. 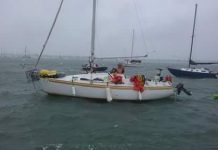