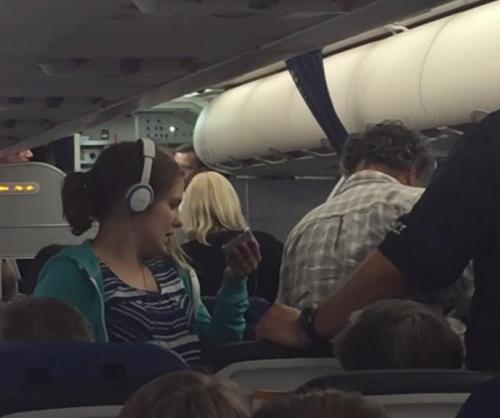 PORTLAND, Ore., May 11 (UPI) — An Oregon mother said she plans to sue United Airlines after her family was booted from a flight because her autistic daughter was branded “disruptive.”

Donna Beegle said her family was returning from Walt Disney World and booked a United Flight from Orlando to Houston with a connecting flight to Portland.

Beegle, who was flying with her husband, son and 15-year-old daughter, Juliette, said she spoke to a flight attendant when Juliette, who is autistic, started showing signs that she could “get to the meltdown point” and possibly start scratching at people without a hot meal.

Beegle said she offered to buy a hot meal from first class, and she was eventually allowed to purchase the meal for Juliette.

However, she said she soon received word the plane was making an emergency landing in Salt Lake City, where police were waiting to escort the family from the plane.

Beegle said she had police speak to other passengers before escorting them from the plane.

“You have a lot of people on your side saying this was not an issue,” she quoted police as saying in an interview with KOIN-TV.

“After working to accommodate Dr. Beegle and her daughter during the flight, the crew made the best decision for the safety and comfort of all of our customers and elected to divert to Salt Lake City after the situation became disruptive. We rebooked the customers on a different carrier and the flight continued to Portland,” Dohm said.

Chris Hall, a fellow passenger who took video of the Beegles being removed from the flight and posted it to YouTube, said he agrees the airline overstepped.

“The child would make noise every now and then, no louder than, say, a baby crying,” he said. “I don’t think they should have landed a plane for her being fussy.”

Another passenger, Marilyn Hedlund, sided with the flight crew.

Beegle said she has contacted a lawyer and plans to file a lawsuit. She said she does not want monetary compensation from the airline, she wants to dispel myths about autism and get training for flight crew members on how to handle similar situations in the future.

“We have to define disruption,” Beegle said. “Is her getting agitated and making sounds a threat?”