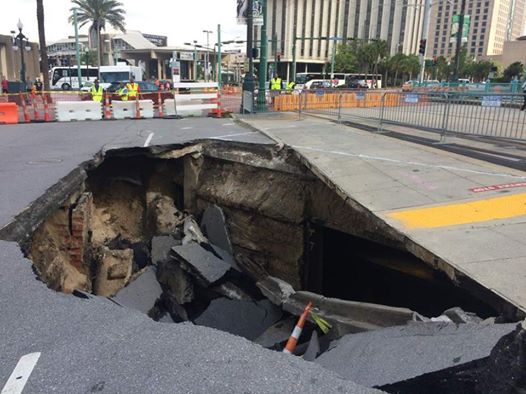 NEW ORLEANS, May 5 (UPI) — A pair of New Orleans residents scheduled a “Sinkhole De Mayo” event for May 5 to celebrate the existence of a 30-foot sinkhole near Canal street.

Drawing inspiration from the Mexican holiday Cinco De Mayo, Facebook organizers Carson Rapose and Chrissy Gross decided to throw a party at the site of the sinkhole and call it “Sinkhole De Mayo”.

“Bring your instruments, sombreros and margaritas, bring your traffic cone pinatas, and your makeshift maracas,” the description for the tongue-in-cheek event reads.

On Thursday, the New Orleans City Council began considering an emergency proposal to allow Mayor Mitch Landrieu‘s administration to hire a construction firm to repair the area around the sinkhole, above a defunct underground highway tunnel.

Landrieu estimated the repairs will cost about $5 million and could take several years to complete.

Gross told The Daily Beast that the idea for “Sinkhole De Mayo” was meant to be a joke and came from a text chain among her friends.

“We like costuming. We like any reason to get dressed up in silly costumes. We were even talking about making our own traffic cone piñata,” she said. “We were just gonna laugh and take pictures.”

She added that the motives for the event were not political and said she did not believe the sinkhole was indicative of a greater issue.

“Whereas yes, it does seem like from the outside, maybe, that sinkholes and rain are an epidemic, it’s not,” she said. “People are still flabbergasted, but, no, New Orleans is not underwater.”

Gross spoke personally with City Hall about gathering a large crowd near the sinkhole, which caused it to be moved to Woldenberg Riverfront Park.

“It’s been a very surreal day,” she said. “It went viral overnight, but I guess I should have expected it. New Orleans loves a party.”