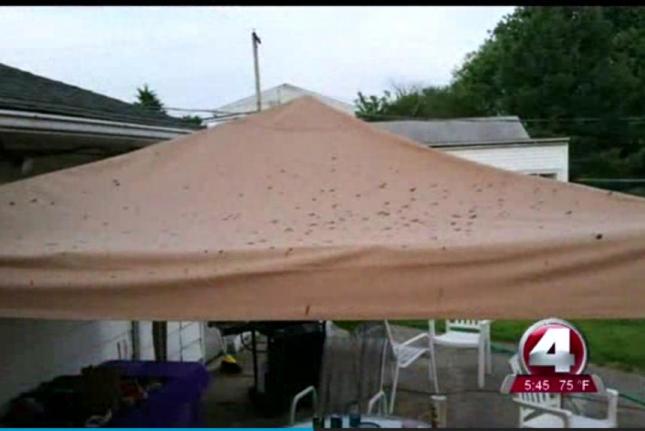 LEVITTOWN, Pa., May 20 (UPI) — A Pennsylvania teen’s family said her sweet 16 party was spoiled and soiled when apparent airplane bathroom waste fell on the birthday girl and her guests.
Joe Cambray of Levittown said there were about 40 people at the party Sunday for his stepdaughter, Jacinda, and the apparent human waste fell from the sky while some of the guests were in the pool and others were playing horseshoes.

“Out of nowhere, from the sky, comes a bunch of feces, lands on her,” Cambray told WTXF-TV.

Cambray said the canopy he erected in the yard was the epicenter of the fecal impact.

“It landed on the baby seat that was here,” he said.

“We just got done with cake. Thank God we took the cake back in, because within two minutes, something fell from the sky. It was brown, it was everywhere, it got on everything,” said Kristie Rogy, Cambray’s sister.

Rogy used a smartphone app to discover there were three airplanes in the sky near the party at the time of the incident.

The Federal Aviation Administration said the incident is being investigated. Officials said regulations require planes to dispose of their waste at an airport, not while flying over a residential area.

A similar incident took place in September, when a New Zealand woman reported a plane had dumped human waste all over her Auckland home.