Sept. 7 (UPI) — Wildlife rescuers in Kenya said an orphaned monkey seized from an illegal exotic pet breeder has struck up an unusual friendship with a pair of orphaned buffalo.

The Lamu Conservation Trust said Zumzum the vervet monkey was brought into the group’s care in May after being rescued from an illegal exotic pet breeder and the primate soon formed an “unusual orphan family” with buffalo orphans Pangani and Konambaya.

The trust said the buffalo have been filling in for Zumzum’s fellow vervet monkeys, which are known to be very attentive to babies and give them plenty of physical contact.

The buffalo have shown patience and affection for the monkey, allowing him to climb over their bodies without rebuke, rescuers said.

The trust said Zumzum is planned to eventually be introduced into the wild. 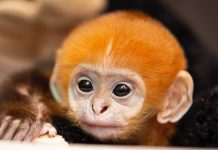