YANDINA, Australia, April 21 (UPI) — A pair of Australian snake catchers called to remove a snake from a home discovered a massive 17-pound carpet python lounging on the kitchen counter.

A video posted to Facebook by Sunshine Coast Snake Catchers 24/7 shows what happened when trappers Ross McGibbon and Richie Gilbert were dispatched to a home in the town of Yandina in Queensland.

The men soon discover the snake they were called to remove is a 10-foot carpet python curled up on the kitchen counter after having recently eaten what the trappers guessed to be a possum or neighborhood cat.

The men estimated the “fatty” python weighed about 17 pounds.

“We then found a nice tree hollow to release the snake where It will spend the next couple of weeks digesting that huge meal. Although these Carpet pythons are harmless to humans it serves as a reminder to keep your pets in at night and your pet enclosures snake proof,” the post read. 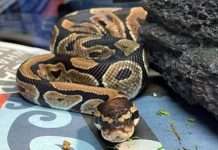