Jan. 18 (UPI) — A Scottish animal hospital shared X-ray images from the body of a 12-month-old puppy that survived swallowing an 8-inch kitchen knife.

“Macie was making a squeaking sound — I thought she’d swallowed part of a toy,” Paisley said. “Then she was sick, but there was no sign of a toy and she started choking.”

The hospital said X-rays quickly revealed the cause of Macie’s troubles — an 8-inch kitchen knife that passed through her stomach and into her intestines with the tip still in her gullet.

“I couldn’t believe it when they said Macie had swallowed a knife. I have no idea where she got hold of it — she could have pinched it out of the dishwasher, but no one saw what happened. None of us could sleep that night as we knew Macie might not survive,” Paisley said.

Macie’s surgery to remove the knife was successful and she was transferred to the PDSA clinic for recovery.

“I’ve never seen an x-ray like Macie’s,” PDSA veterinarian Emily Ronald said. “She was extremely lucky to survive. Her saving grace was that she swallowed the handle-end first — the blade-end would undoubtedly have pierced her organs, likely causing fatal injuries.”

“The morning after surgery, she was bouncing all over the place as if nothing had happened. Macie has been back for frequent check-ups over the past two weeks and we’re pleased she’s recovering and healing well,” Ronald said. 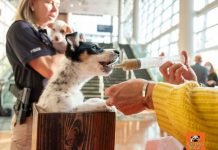