A probable cause statement from the 5th District Court of St. George said Craig Anthony Balubar, 37, is facing charges of:

On July 5, the arresting officer from Washington County Sheriff’s Office responded to a report of a burglary.

“The victim reported a male had crawled through the doggy door to his residence and was inside his home,” the statement said. “The victim retrieved his firearm for protection until police arrived.

“Upon arrival I met the victim and the suspect male in the back of the residence. The suspect male was identified as Craig Balubar. Craig was sitting on the floor of the bathroom naked and was only wearing socks and shoes.”

The officer instructed Balubar to step outside and gave him a blanket.

“I asked Craig what he was doing here,” the arresting officer wrote. “Craig stated I wouldn’t believe him if he told me, then started to ramble nonsense. I asked Craig when the last time he used drugs was in which he stated today.”

Balubar said he had used methamphetamine that day.

“Craig stated he was hearing sexual voices in his head and was following the voices,” the statement said. “Craig stated he followed the voice to the listed address. The voice told Craig he could find her in the home and that’s when he entered the residence.” The suspect said he was then looking for a woman to have sexual relations with.

Balubar stated he was at the Chevron gas station when he heard the voices and that he then took off his clothes and scaled the wall separating the back of the home from the neighboring properties.

The suspect was transported to Purgatory Correctional Facility, where he is being held without bail. 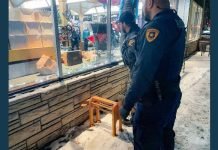