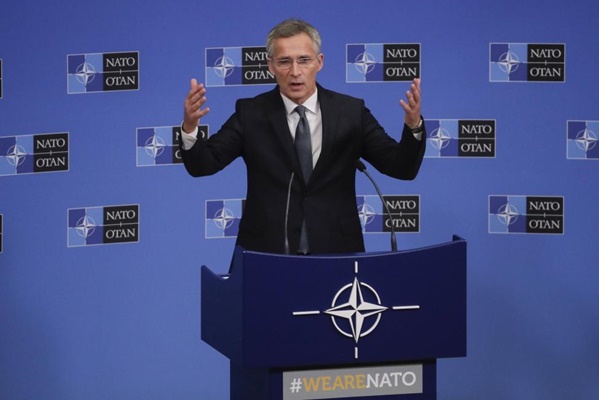 He said NATO defense ministers plan to discuss Russia’s development of the SSC-8 — the 9M729 in Russia — at a meeting Wednesday.

“We call on Russia to take the responsible path. Unfortunately, we have seen no indication that Russia intends to do so,” Stoltenberg said during remarks in Brussels.

He said if Russia doesn’t comply with the warning, NATO’s response will be “defensive, measured and coordinated.” He said NATO forces would not deploy land-based nuclear missiles in response.

The missiles and their mobile launch systems have a range of 310 miles to 3,417 miles, the Center for Strategic and International Studies Missile Defense Project says, which violates the 1987 Intermediate-Range Nuclear Forces treaty between Russia and United States. The agreement banned the two countries from having land-based ballistic and cruise missiles with ranges between 310 miles and 3,417 miles.

In February, U.S. Secretary of State Mike Pompeo said the United States planned to abandon the treaty because of Russia’s violations in developing the SSC-8 dating back to 2014. Russia announced its plans to withdraw the next day, accusing the United States of violating the treaty since 1999 by testing combat unmanned aerial vehicles. Russia said such vehicles have similar characteristics as land-based cruise missiles.

It requires six months to withdraw from the treaty, which means it’s still in place through early August.

Stoltenberg said violations of the INF Treaty could pose a risk to security in Europe. He said NATO believes the United States is in full compliance with the agreement.

“As Russia is deploying new missiles we must ensure our deterrent is effective,” Stoltenberg said. “This is NATO’s job.”

In April, the Russian government said it severed contact with NATO. The relationship has been strained since Russia forcibly annexed the Crimea peninsula in 2014. Tensions flared again last year when Russia captured Ukrainian soldiers and military ships in the Kerch Strait, a move Western governments said violated international law.