March 25 (UPI) — The remains of a pilot in a German World War II warplane unearthed in Denmark recently have been identified as a 19-year-old from Bavaria, officials said Friday.

The plane was located by a schoolboy, Daniel Rom Kristiansen, and his father with a metal detector investigating local legend that a German fighter had crashed in a field near their home.

On Friday, a German government office said the remains the family found inside the plane were that of Hans Wunderlich, 19, whose Nazi fighter plane crashed on Oct. 10, 1944. Authorities were able to identify Wunderlich using a food ration card with his name on it and the flight’s log book that were found amid the wreckage.

Wunderlich was born in Neusorg, a small German town in Bavaria, in 1925.

The cause of the crash is unknown. Nazi war records noted the plane went down in a marshy field and said recovery efforts were suspended because it was determined to be “in vain,” TheLocal.de reported.

The remains are being held by Danish authorities, but ultimately since there is no surviving family, it will be up to the German War Graves Commission, which handles funerals of World War II-era soldiers, to decide where Wunderlich is to be buried. The Danish newspaper that first published the pilot’s identity, the Daily Nordjyske, said it is likely the pilot will be buried in a Danish war cemetery. 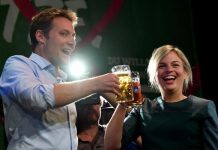