The proposition, which won in the November election, provided for patient access to medical marijuana. The replacement places numerous restrictions on access to medical cannabis for the patients Proposition 2 was created to help.

“The action yesterday by the Legislature not only did tremendous damage for tens of thousands of people whose suffering can be relieved by medical cannabis, but it also demonstrated tremendous contempt for the democratic process provided by the Utah Constitution,” Anderson told Gephardt Daily.

“It is the height of arrogance and contempt toward this aspect of direct democracy provided for by Utah’s Constitution for the governor to call a special session at the earliest possible time after the effective date of the initiative statute to emasculate the protections for access to medical cannabis as provided in Proposition 2.”

Anderson said he will file an action answering the “disregard by the Legislature of the initiative passed by the majority of the voters in the last election,” he said.

“We’ll also likely be challenging the control and interference with the functions of government by the LDS Church in its blatant orchestration of a campaign to defeat Proposition 2, then — having lost — to have its way with the Legislature.”

The Church of Jesus Christ of Latter-day Saints opposed the passage of Proposition 2, and was invited to contribute input when Governor Gary Herbert called a special session to craft a compromise bill to replace the proposition voters approved.

“No matter what happens, in the long run, the Church and its minions in the Utah Legislature are going to be the real losers, because they have just ratcheted up immensely the level of resentment by people both in and out of the Church with its heavy-handed tactics and significant disregard for the relief that medical cannabis has to offer for so many people.”

Anderson, who served as Salt Lake City’s mayor from 2000 to 2007, has been  representing multiple clients seeking access to cannabis for medical treatment. They include:

TRUCE (Together for Responsible Use and Cannabis Education), a nonprofit
organization focused on educating the community and stakeholders about the legitimacy of cannabis therapeutics.

The Epilepsy Association of Utah, a nonprofit organization dedicated to providing
opportunities for its members to live more normalized lives while managing their epilepsy.

Doug Rice, a retired paramedic-captain, cancer survivor and caregiver to an adult
special-needs daughter, who suffers from Angelman’s Syndrome and epilepsy and uses cannabis to control her seizures.

Anderson said the replacement bill supporters, including the LDS Church officials, have added restrictions that will require weeks of unnecessary suffering by patients, especially those afflicted by auto-immune diseases, whose ability to receive medical cannabis was excised from the Prop 2 ballot initiative.

“We think that’s one of the cruelest features of what they’ve done here,” he said.

People who have qualifying conditions other than ulcerative colitis and Crohn’s disease will be required to go without “the relief for their pain offered by medical cannabis, for at least two weeks,” Anderson said. First, they will have to try conventional treatments or medication for two weeks, without relief, then return to their doctors to document they were not helped, “then finally get a recommendation for cannabis.”

Under Prop 2, “they automatically qualified as having a qualified condition that would allow an immediate recommendation of access to medical cannabis,” Anderson said.

It’s women who will feel most of that pain, said Anderson, noting that while about 7 percent of the population suffers from autoimmune conditions, 78 percent of those patients are female.

“I think total stupidity and an effort to rush this bill could be likely an explanation also. I hate to put it in those terms. I try to be civil with those I oppose on these kinds of things, but in this case there’s just too much pain and suffering involved and its being given such short shrift by people who don’t seem to know anything about which they are speaking and making public policy.”

Anderson also noted that under the newly passed law, “They’ve also placed artificial and arbitrary limits on the number of patients medical providers can treat with medical cannabis,” he said.

“If they did that with regards with opioids, we wouldn’t have people dropping dead all over our states.”

Anderson said he believes legislators are fixated on medical marijuana, “because they are mostly older, out of touch people who have no idea about what medical cannabis can do for people, I think, and because they’re getting their marching orders from The Church of Jesus Christ of Latter-day Saints, which didn’t like the fact that it lost (the election) even though they were sending out emails to all their members telling them how to vote.”

Anderson said the LDS Church has a long history of trying to control the lives of both members and nonmembers. Resentment is high, he said.

“It’s not unlike the outrage people feel both inside and outside the church at the cruel mean-spirited comments regarding people who, in their view, have wrong sexual orientation.”

“I just think that we need to have more direct conversation in this community,” he said. “Everybody’s being so quiet and so polite in the face of the Church dictating so much of our public policy and oftentimes causing tremendous resentment. It’s not going to go away. It’s just being exacerbated by the kind of thing that we’re seeing now.” 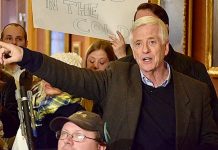 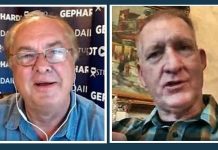 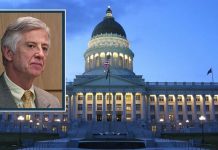