March 26 (UPI) — Two of the three major U.S. stock indexes closed with gains for two consecutive days for the first time in weeks on Wednesday.

The Dow Jones Industrial Average closed up 495.64 points, or 2.39 percent, and the S&P 500 rose 1.15 percent, while the Nasdaq Composite failed to maintain gains from earlier in the day, closing down 0.45 percent.

The gains were fueled mostly by the news that the White House and Senate lawmakers agreed on a $2 trillion rescue package to stabilize the U.S. economy as the coronavirus crisis moves forward. The Senate is expected to vote on the bill when it reconvenes Wednesday.

Stocks, however, came down from their highs of the day after presidential candidate Sen. Bernie Sanders said he was prepared to put a hold on the bill “until stronger conditions are imposed on the $500 billion corporate welfare fund.”

Boeing stock rose 24 percent, leading the Dow’s gains on the day, with a 9.2 percent increase by Nike also leading to its increase. Tech stocks including Facebook, Amazon, Apple, Netflix and Google’s parent company alphabet all closed down on the days.

Wednesday’s market surge followed the 2,100-point increase for the Dow on Tuesday, and a historic 8 percent gain for Japan’s Nikkei 225 index earlier Wednesday, its largest single-day gain since 2008. The Australian ASX index climbed more than 5 percent and Hong Kong’s Hang Seng index was up nearly 4 percent.

Former Federal Reserve Chairman Ben Bernanke said he expects a “very sharp” recession brought on by the disease followed by a quick rebound.

“If there’s not too much damage done to the workforce, to the businesses during the shutdown period, however long that may be, then we could see a fairly quick rebound,” he told CNBC.

“Once the virus goes away and if we play our cards right and keep everything intact, then everyone will go back to work and everything will be fine,” he said.

Dow surpasses 30,000 points for the first time in history 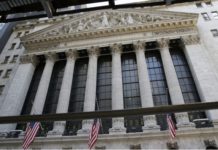 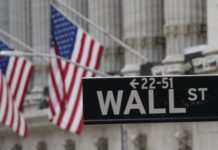