Dec. 22 (UPI) — President Donald Trump will spend Christmas and ring in the New Year in South Florida at his Mar-a-Lago estate.

Trump will arrive in Palm Beach County on Friday afternoon — and will meet up with first lady Melania Trump and 11-year-old son Barron at what the president calls the “Winter White House.”

Before he left the White House, Trump signed the tax reform bill passed by Congress Wednesday.

In Florida, Trump will host a New Year’s Eve party at his resort — which will be more expensive this year. The ticket price for dues-paying members was raised to $600, while guests will have to pay $750.

The ritzy event will be held at the Donald J. Trump ballroom and provide a red-carpet entrance, a multi-course meal and an opportunity to meet celebrities.

Entertainment for the event will include a cover-band, Party on the Moon, who performed at several other Mar-a-Lago events.

“I’ve been to a lot of black tie events. This was a different feeling,” Lynn Aronberg, the owner of a Palm Beach public relations firm and a guest at last year’s event, said. “It was the best event I’ve ever been to.”

“In this economy, we’re seeing prices for a lot of things go up.” 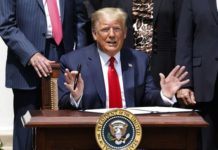