Nixon, known best for her role as Miranda Hobbes in HBO’s Sex and the City, shared a video to Twitter declaring her candidacy and calling out leaders in government for “letting us down.”

“Something has to change,” she said. “We want our government to work again, on healthcare, ending mass incarceration, fixing our broken subway. We are sick of politicians who care more about headlines and power than they do about us. It can’t just be business as usual anymore.”

The 51-year-old Nixon is described as “a lifelong New Yorker and progressive activist” on her campaign donations page and if elected would be the first female and the first openly gay mayor of New York.

Cuomo, who has served two terms as governor, said last week he’s “not nervous about whoever runs.”

“There’ll be people who run. That’s called elections, and that’s fine,” he said. 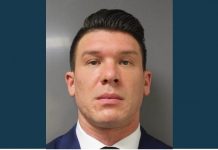 Buffalo, N.Y., officers charged with assault for injury to 75-year-old