NEW YORK, Oct. 19 (UPI) — Kristen Stewart says she doesn’t think the views of the young woman she plays in “Billy Lynn’s Long Halftime Walk” are typical of the average millennial.

In director Ang Lee‘s latest drama, 26-year-old Stewart plays Kathryn, the sister of the 19-year-old, titular soldier who temporarily returns home to Texas as a hero after a tour in Iraq.

While Billy prepares to be honored with the other men in his battalion during the halftime show of a 2004 Thanksgiving Day, pro football game, Kathryn tries to convince him not to return to battle when the celebratory event ends.

The siblings’ relationship is complicated, in part, because Billy joined the army to avoid criminal charges after an altercation with his sister’s boyfriend who dumped Kathryn while she was in the hospital recovering from serious injuries she sustained in a car accident.

Kathryn can’t understand why Billy doesn’t quit the service as soon as he has the opportunity, however he is ambivalent because he feels pride in himself and commitment to his men.

Asked at a recent New York press conference about her character’s anti-war views and whether Stewart sees Kathryn as the conscience of the film, the actress offered a thoughtful and passionate answer.

“I was a lot younger when this all went down and I think that I share a really generalized, sort of remote relationship to it that most of the people my age do, unless you’ve had a family member serve or unless you’ve become fanatically — not fanatically — but unless you’ve become fervently involved politically, which, to be honest, my generation has very little to do with and what I found the most interesting about this is just that you have somebody who is essentially a pacifist, but is not overtly… First of all, in the film, she never describes her liberalism in more words than anything that doesn’t sound completely humanitarian,” she explained.

“That doesn’t just sound like somebody who’s provoking somebody or really requiring them to think for themselves and acknowledging a massive gap between herself and somebody that she’s known intimately her whole life and now could never hold as close as she has because they are now different beings.”

Stewart went on to say Kathryn is attempting to show Billy how his experiences have distanced him from his loved ones and she wants him to think about whether what he is doing is worth that.

“I think what she is doing, which is pretty topical, it’s good timing — it’s [expletive] perfectly appropriate timing — to be like, ‘Well, have you actually considered that these inexplicable pieces are affecting us and you’re my brother and you are so inside of something that you haven’t ever been given the opportunity to understand and is that fair and can you be proud of that?'” the actress noted.

“I don’t think that she is completely left-wing — like, ‘Oh, anti war!’ — it’s just, ‘Well, let’s understand what we’re fighting for,'” Stewart continued. “And I think that she worries — this is a personal thing — but she worries for him. What’s going to happen when your training fades and all of those mechanical default responses fade and then you become a human being that doesn’t know how to contend with what happened? And then, like, further than that, how do we contend with putting those people there? It’s really hard. It’s not something that anyone has done yet, really. Yeah, she is kind of like the epitome of question rather than opinion, which I think is pretty cool.” 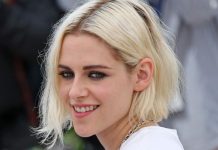