Oct. 14 (UPI) — Oscar-winning actress Marcia Gay Harden has signed on to star in the Lifetime movie, “Love You to Death.”

Alex Kalymnios is directing the project from a screenplay by Anthony Jaswinski. Kalymnios previously helmed the cable network’s tele-picture, Cleveland Abduction, in 2015.

“Inspired by a true story, “Love You to Death” is a shocking tale of a mother and daughter who are nothing like they seem, their tumultuous relationship ending in a brutal murder,” a press release said. “Camile and Esme are well-known in their community — Esme as the sickly, child-like wheelchair-bound daughter, and Camile as the perfect caretaker and mother. They seem a perfect pair until Camile is found stabbed to death in her home, and Esme has vanished, believed to be kidnapped by the killer. But when Esme is found, a terrible secret emerges.”

No additional casting or air date were announced.

Harden, 59, is known for her roles in the TV show “Code Black,” the “Fifty Shades” trilogy and films “Pollock” and “Mystic River.” She earned an Oscar for Best Supporting Actress in “Pollock.” 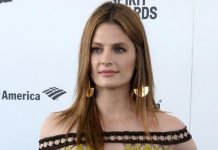 ‘Sister Cities’ with Stana Katic and Jacki Weaver to premiere on Lifetime Sept. 17