High-level officials from both countries met on Saturday and held talks for nearly 10 hours, adjourning shortly before sunrise Sunday. Talks will resume later Sunday at the historic Panmunjom “truce village” within the Demilitarized Zone between the countries.

The talks are the first high-level discussions between the two countries in about a yearand came just hours before a 5 p.m. deadline that Pyongyang had given South Korea to stop loudspeaker broadcasts of propaganda messages along the countries’ heavily militarized border.

Discussions come after the reported firing of North Korean artillery shells on Friday and a previous apparent land mine explosion that injured two South Korean soldiers within the DMZ. Pyongyang accused South Korea of “provocations” because of the “hostile U.S. policy toward North Korea.”

South Korea evacuated nearly 4,000 residents from border locations, warning that it would “retaliate harshly” to any aggression. Media representatives are currently prohibited from attending discussions, so it is unclear how talks are developing. 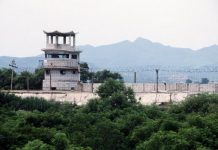 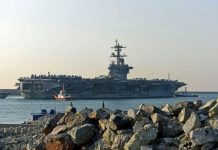