TMZ and UsMagazine.com reported the legal papers were filed in Pasadena on Friday.

The former couple announced in September 2017 that they had separated after eight years of marriage.

“With absolute love and respect, we decided to separate as a couple earlier this year,” they said at the time. “To give our family the best opportunity to adjust, we wanted to keep this a private matter before sharing it with the public. We are and will always be united in our support of each other and our family.” 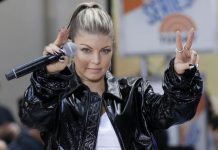 Fergie’s son appears in her ‘A Little Work’ music video