July 30 (UPI) — Shawn Stockman of Boyz II Men says he prefers not to sing the “The Star-Spangled Banner” for reasons including solidarity with NFL protests over the national anthem.

Stockman, 45, who released the first single from his upcoming solo record, “Feelin Lil Som’n,” on Friday, told UPI in an interview that his feelings about the national anthem have changed in recent years.

He criticized Key for being a slave owner and including a line about the killing of slaves in the third verse of “Defence of Fort M’Henry,” the poem that later became “The Star-Spangled Banner.”

Stockman said the poem, written about a battle during the War of 1812, does not represent the modern United States.

“It did not represent America as we now see it, or as we now know it,” he said.

The singer compared replacing “The Star-Spangled Banner” as the national anthem to tearing down statues of deposed dictators.

“Why would you have mementos of past transgressions of the country around?” he asked.

Stockman said people who criticize NFL players for kneeling during the anthem are taking the protests out of context.

“People’s ideas on that are so askew. It had nothing to do with what people were upset about it for,” he said. “It had nothing to do with disrespecting the military. If you really looked at the whole process, [Colin] Kaepernick took the knee as a suggestion from a military man, because he understood as a solider what that meant, and what Kaepernick was trying to convey.”

Kaepernick began his protest against police brutality in 2016 by sitting during the anthem, but he switched to kneeling after consulting with Nate Boyer, a former U.S. Army Green Beret.

Stockman said he agrees with Kaepernick’s support of the Black Lives Matter movement.

“How long have black folks been arguing and complaining about police brutality? This isn’t a new thing. It’s just being televised,” he said.

The performer said Kaepernick and the other NFL protesters inspired his feelings about performing the anthem.

“Kaepernick, who I commend immensely, put his neck out when he was at his height, to bring to the forefront an issue that has long plagued a certain group of people that live in this country. For a long time,” he said.

“So that’s why I felt like, ‘You know what? I don’t want to do that,'” Stockman said of performing the song at sporting events. “I stand with Kaepernick, I stand with all these guys who are trying to just bring light to a very severe social issue.”

Stockman said he has a personal stake in the issue.

“There is some level of selfishness to it, because I have black kids, and I don’t want my black kids not being able to go to a party, or not being able to hang out with their friends because they’ll get harassed for the color of their skin,” he said.

Stockman said that while he won’t perform the song solo anymore, he did recently put aside his personal reservations to sing with Boyz II Men at a WNBA game in Los Angeles.

“Sometimes, being in a group, you have to put your own feelings and opinions aside for the greater good of the group. So for the record, that’s why I did it,” he said. 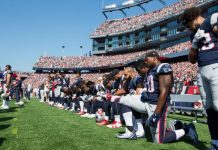 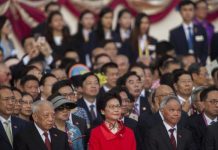 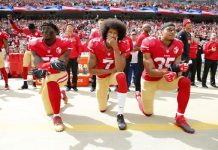