Felicity, a literary agent, showed off her baby bump Thursday at the New York premiere of Stanley’s movie “Final Portrait.”

Felicity, who already shares 3-year-old son Matteo Oliver with Stanley, wore a colorful striped dress with an empire waistline. The expectant mom was all smiles as she posed for photos with Stanley on the red carpet.

Felicity and Stanley were joined by Felicity’s sister, Emily Blunt, and her husband, John Krasinski, as well as Blake Lively and Ryan Reynolds. Blake cradled Felicity’s growing belly during a sweet moment with Felicity and Emily.

“I’m trying [to spoil her],” Stanely told Us Weekly at the event. “Yes of course, being very attentive.”

Stanley, who directed “Final Portrait,” is also dad to twins Nicolo and Isabel and daughter Camilla. He was previously married to Kate Tucci, who died of cancer in 2009, and met Felicity at Emily’s wedding the next year.

Stanley and Felicity wed in London in September 2012 after marrying in a civil ceremony. The actor is slated for a number of upcoming films, including “Patient Zero” with Matt Smith and “The Silence” with Kiernan Shipka. 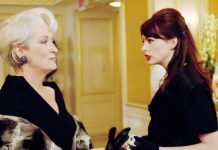