Iger made the announcement Wednesday during the company’s quarterly earnings call, where he discussed other upcoming films in the franchise and how Disney plans to keep the Star Wars brand successful.

“There is no better way to propel this franchise into the future than producing quality products,” Iger said. “Filming of Star Wars: Episode VIII, the next chapter of the legendary saga, has just commenced, and it will be in theaters December 2017. And production of Episode IX, a 2019 release, has also begun.”

Directed by Rian Jonson, Episode VIII is scheduled for release on Dec. 15, 2017 after being pushed back from its original landing date of May 26, 2017.

Before that however, the anthology film, Rogue One: A Star Wars Story directed by Gareth Edwards is set to release on Dec. 16, 2016. “Filming of Rogue One is virtually completed, and we absolutely love what we’ve seen so far,” Iger said. “This is the first of a set of planned stand-alone stories, and we’re already in preproduction on our next one, for release in May of 2018.”

Recently, Episode IX director Colin Trevorrow announced that he would be shooting the sci-fi epic on film joking, “It’s a period film. It happened a long time ago.” 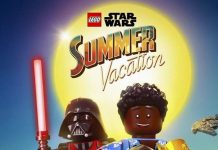