“Okja” follows a young girl named Mija “who must risk everything everything to prevent a powerful, multi-national company from kidnapping her best friend – a massive animal named Okja,” reads the film’s official synopsis.

“With ‘Okja’ I want to show the beauty that can exist between man and animal, and also the horror between them,” said Bong in a statement.

It is still unknown if Yeun’s fan-favorite “Walking Dead” character Glenn is still alive on the series following the zombie drama’s mysterious blood-soaked Season 6 ending in which an unknown major character was killed. 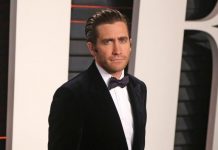