Sept. 28 (UPI) — “Tenet” is the No. 1 movie in North America for a fourth week, earning an additional $3.4 million in receipts, BoxOfficeMojo.com announced Sunday.

Because of the coronavirus pandemic, most new movie debuts have been delayed until next year, with some U.S. theatrical releases, such as “Mulan,” skipped altogether in favor of at-home, streaming-service premieres.

Theaters throughout the United States and Canada were closed for months in keeping with social-distancing practices intended to slow the spread of the virus.

They recently began opening their doors; however, attendance has been low with few new movies to entice audience members.

On March 8, the North American box office take was about $100 million. 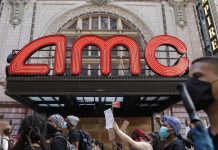 Some U.S. movie theaters plan to reopen in July