NEW YORK, Nov. 16 (UPI) — Patrick Hardison, a former volunteer firefighter in Mississippi, entered a burning home in 2001 on a rescue search when its roof caved in, leaving him with burns on his face, head, neck and upper torso. Hardison lost his eyelids, lips, most of his nose and hair.

Fourteen years and 26 hours of surgery later, doctors at New York Langone Medical Center completed the most extensive facial transplant in history, giving Hardison back a measure of normalcy in his life.

“When I met Patrick and heard his story, I knew that I had to do all I could to help him — and every member of my team felt the same way,” Dr. Eduardo Rodriguez, who led the surgical team of more than 100 clinicians, said in a press release. “His surgery sets new standards in facial transplantation and will serve as an amazing learning tool. We could not have helped Patrick without amazing teamwork.”

Doctors approached the family of David Rodebaugh, a Brooklyn artist and organ donor who died from injuries sustained in an accident, explaining Hardison’s situation.

In August, Hardison received Rodebaugh’s face and scalp — including his eyelids and the muscles that control blinking.

Among other parts of the surgery doctors called a “milestone” for this type of surgery: Transplantation of the ears and ear canals; transplantation of selective bony structures such as chin, cheeks and the entire nose; and advanced use of 3-D modeling and printing for patient-specific cutting guides to create a precise “snap-fit” of the skeleton.

Doctors were pleased with Hardison’s progress almost immediately as hair on his scalp and face started growing back, and he could blink on the third day of recovery as his swelling subsided.

Three months removed from surgery, Hardison continues to go through physical therapy to rebuild strength and stamina, speech and swallowing therapy to return his ability to speak, and occupational therapy to re-learn daily tasks such as shaving.

“I am deeply grateful to my donor and his family,” Hardison told the L.A. Times. “Even though I did not know who they would be, I prayed for them every day, knowing the difficult decision they would have to make in order to help me. I hope they see in me the goodness of their decision.” 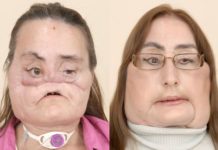 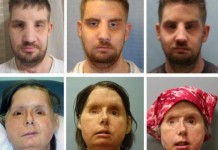