WASHINGTON, Dec. 10 (UPI) — A pesticide used by farmers until it was banned for commercial sale in the United States in 1988 was linked to the development of Parkinson’s disease in people who consumed it in milk, researchers reported in a new study.

Previous studies have suggested milk could increase the risk for Parkinson’s, a neurodegenerative disease that affects motor neurons in the brain, however researchers found in a study of Hawaiian men who donated their brains to science that the pesticide heptachlor epoxide may have played a role in their disease.

Heptachlor and the form it takes when sprayed, heptachlor epoxide, was 1980s by pineapple farmers and made its way into milk after scraps and debris from farms were fed to dairy cows. Scientists said the chemical persists in soil and water for years, and has been found in both, as well goat and milk supplies in other parts of the world.

An international team of researchers used data collected from 1965 to 1968 by the Honolulu-Asia Aging Study on milk intake by 449 men between ages of 45 and 68, who then agreed to donate their brains for research after death, postmortem studies of which were done between 1992 and 2004.

Neuron density in the brains was found to be lowest among nonsmokers who consumed the highest amounts of milk, with density found 41.5 percent lower for people who drank 16 ounces or more of milk per day. The pesticide was found in 9 out of 10 brains of the people who drank the most milk, and found in just 63.4 percent of men who drank no milk.

Despite the strong link found in the new study, the Parkinson’s Disease Foundation cautions the milk could not be tested, leaving the results of the study to be somewhat hypothetical.

“The researchers could not test whether the milk the men drank was contaminated with pesticides, and no one knows how long or how widespread the contamination was before being detected,” the foundation said in a press release. “The potential link between drinking milk, pesticides and development of Parkinson’s disease needs further investigation.”

Heptachlor was used for termite control as well as on crops through the 1960s and 1970s, when its use declined until U.S. commercial sales of the chemical were banned in 1988. The U.S. Environmental Protection Agency still allows the use of heptachlor to control fire ants in power transformers. The U.S. Food and Drug Administration limits for residual heptachlor and heptachlor epoxide for most food crops is .01 or .02 parts per million, and .1 parts per million for milk solids.

The study is published in the journal Neurology. 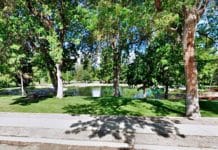